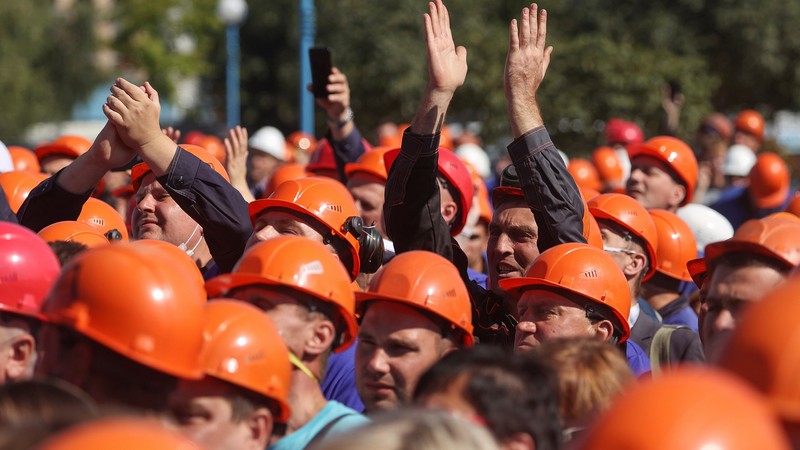 Collective Editorial Board to the Workers of Belarus

We, the Communist Collective Redaction, express our deep concern for the fate of our comrades and workers in the Republic of Belarus.

For many years, Lukashenko's system of power had been striving for the working people to regard it as their own. Year upon year, the president reported on the successes of the "People's state", keeping silent about the real "achievements": rising retirement age, temporary contract system of employment and the creeping privatization of state-owned enterprises.

Now Lukashenko threatens to expel everyone, who tries to organize the strikes demanding new elections, from work: “You have nothing to do in the factories”. He arrogantly speaks out to the workers of state enterprises, as if they belong to him personally. Lukashenko is a representative of the state-capitalist system, which exploits the workers just like any other capitalist. Although the interests of the current government converge so far with the interests of the working people in keeping the large enterprises in state ownership, in all the other aspects its fundamental interests are the same as those of other capitalists: to prevent workers from organizing, to keep them on duty at all cost, to pay as little as possible, and to get as much as possible out of them.

The very same goal is pursued by those who call themselves "opponents of the current government" - the liberal and nationalist opposition. Under the slogan of "fighting for the fair elections", they want to use you to grab the power for themselves, and then to use it against you. Their fundamental interests are still the same - to appropriate the results of the workers' labor, to continue to stifle the labor movement, and to prevent the workers from fighting for a better life.  Just look at Lukashenko's neoliberal pension reform and compare it to the opposition's program. The goal is one - to eliminate the social guarantees of pension.

Why is this all happening? Because the "opposition" also represents the interests of those who own enterprises — the interests of the capitalists. At this point, we must also not forget about the right-wing threat. The "opposition" uses nationalists of various degrees of radicalism in their protests. The rhetoric, symbolism and aesthetics of their protests reflect the ultra-right agenda typical for the former USSR. The experience of many other countries shows that capitalists successfully use the ultra-right force to implement very tough neoliberal reforms. The workers should never allow themselves and their fellows to become pawns in the hands of the capitalists!

Comrades! One hundred years ago, our ancestors had proved that rights cannot be begged — rights can only be won. And for this purpose, it is necessary to organize and to explain to other fellow laborers the importance of a joint struggle, of a single blow aimed at all the fronts against the capital and the bourgeois state.

This must be done especially now, when the authorities are entering into a bitter conflict against the opposing group of bourgeoisie: they need to fight each other, which means that they need to try to drag the labor collectives to one side or to the other. And the hypocrisy of both camps of the bourgeoisie will keep revealing itself as soon as the workers try to declare their vital interests.

No one, however, will hear you one by one.  Remember that it is easy to run over one worker; more difficult - over a single team; and when all the workers of all enterprises unite for a coordinated halt of production, they become the force that is able to organize the real system of power for the interests of the majority of the people, and not just one or another handful of parasitic oligarchs or officials.

Comrades! Unite around the demands that meet your real interests:

- prohibition of the "temporary contract" slavery and of the creeping privatization;

- abolition of the "Decree No3 on Social Dependents" (because unemployment is an integral property of the bourgeois labor system);

- democratization of the political system in the interests of the working people (a well-functioning voting system protected from fraud; a single-chamber people's parliament; people's courts; control over the elections by labor collectives, local people's assemblies, public organizations - women's, consumer's, youth's, the unions of scientists, artists and so on);

- the implementation of the political freedoms (freedom of expression, marches, strikes, meetings, association into unions, and so on) in the interests of the working people;

- a ban on raising the retirement age.

Discuss these and other demands within your teams, organize group chats, put forward the smartest and most responsible representatives as your speakers, and demand that your opinion be taken into account - demand it from the factory administration, from the street, from the government itself. And if they are too slow to hear you, reinforce your voice with the collective action: find those workshops in which the strike will stop the whole production or the provision of services, and be ready to jointly stop all work at the enterprise at the right time. Remember that neither an official, nor a policeman, nor a bourgeois can replace you at the working bench, while you can easily replace their useful social functions!

The Collective editorial staff expresses their full moral, informational and organizational support to the fraternal working class of Belarus.

Only the international labor solidarity, only the universal participation of all the communists of the former USSR and the world in the fate of the labor movement of Belarus will guarantee that the Belarusians will not be left alone against both the bureaucratic and police arbitrariness and the manipulations by the right-wingers - that they will not be thrown out of their jobs, but rather will be able to prevent the destruction of the industrial potential; that they do not lower their heads, but rather themselves decide their own destiny! We just need to help them. Unity is our strength!

Communists of the former USSR and the world, we call upon you to render all possible assistance to your working comrades!