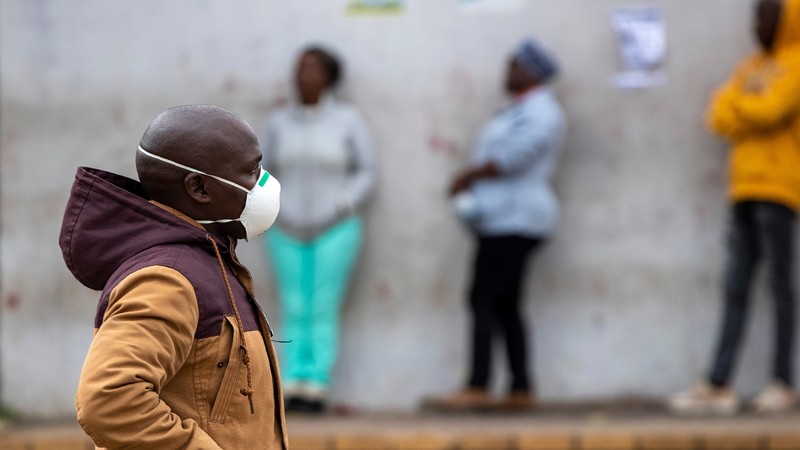 Benin will not serve as a land for testing the anti-Covid-19 vaccine and the deadly vaccines of the Imperialists!

From the editors The working classes of the whole planet have suffered from the exploiting classes.  But the fate of the peoples of the African continent stands out as special.

The twentieth century undoubtedly brought positive changes to the life of the peoples and countries of Africa. Victorious socialism, social progress led to the process of decolonization.  True, the colonial stranglehold was almost immediately replaced by the neocolonial one.  Imperialism, as before, pumps out all the juices from this 1/5th global land.  And the attitude of the «rulers» of the world towards the inhabitants of the Continent has not changed too much.  As before, it is consumerist, predatory, and boorish.  Except that today it is perhaps somewhat powdered, disguised as demagogy about «democracy and human rights».

The article by the First Secretary of the Communist Party of Benin, Philippe Noudjenoume, is a convincing evidence of that.

Please consider this publication as an expression of solidarity with the people of Benin and all the working people of the African continent in the struggle for their rights, human dignity, economic development and social progress.

First Secretary of the Communist Party of Benin

President of the Patriotic Convention of the Left Forces.

To The People of Benin within the Country and in the Diaspora!

To People of the Whole World

Benin will not serve as a land for testing the anti-Covid-19 vaccine and the deadly vaccines of the Imperialists!

On the French television channel LCI on April 2, 2020, Jean-Paul Mira, professor of medicine and Head of the Resuscitation Department at Cochin Hospital in Paris, and Locht, Director of Research at INSERM (National Institute of Research and Medical Studies) made remarks that were at the very least shocking and inadmissible for the human conscience. They simply state that it is necessary to test anti-coronavirus vaccines in Africa. In other words, to make Africans «laboratory rats» for the big pharmaceutical companies. It is rumored that African countries have already accepted this sordid and criminal operation. From everywhere, there was a massive reaction against the attempt. Even the government of Patrice Talon (President of Benin – translator’s note) through his spokesperson had to declare: «it is out of the question that they will come here to test... a vaccine that could have hazardous results on the Beninese population». Very good! The protest clamor was so strong that the two experts tried to backtrack, getting themselves into more trouble: «Sorry, if my words were not clear» – so they say!

But if the above statement has any merit, it is to make public the intentions (expressed or not) and the practices of the States and international institutions against the African people for a certain number of years with the tolerance, if not the complicity of the leaders of our countries.

Already a few months ago in Paris, «a conference brought together a panel of white participants, to think about more effective ways to reduce the black population in Africa. One of the conference organizers, a historian and associate professor of African history, Bernard Lugan said: «Population growth in Africa is a threat to European civilization ... I do not recommend dropping a nuclear bomb on the Africa, but we cannot wait to see this population growth close to Europe. This is a danger we must take seriously….The Plan is to more closely organize private and public organizations in the Western countries to provide money and logistics for faster and more effective actions to curb the «frightening» growth of the African population» (CPCM Social Networks Forum of March 3, 2020).

Everyone has heard the declaration of French President Emmanuel Macron as soon as he came to power on the «demographic danger» in Africa. African heads of state relayed this statement and even called for a conference on African demography. However, a simple comparison with other continents shows that the African continent, due to slavery and colonization, is the least populated continent on the planet; that Niger, Mali, Chad and Mauritania together, with an area of 4.8 million km2together have only 64 million inhabitants, while the European Union with an area of 4.5 million km2 (slightly smaller) has 446 million inhabitants, that even the forested countries such as Gabon, Democratic Congo, Congo Brazzaville do not have a greater population with 3 million km2with hardly more than 94 million people[1]. So where is the problem? Why these loud shouts about (against) demography in Africa? Is this in the interest of the African people? No way.

These are not simple statements with which we are afflicted, the words are preceded and followed by practices and programs minutely concocted by the most noble international institutions in the world (WHO, UNFPA, UNICEF, USAID – US Agency for International Development, AFD – French Development Agency), to reduce the African population. They do it through vaccines without the knowledge of the people. They will vaccinate for everything: polio, tetanus, diphtheria, whooping cough, hepatitis, etc. The Expanded Program on Immunization (EPI) follows one another non-stop. And with our consent. Is this beneficial? It is not sure. The case reported by the Catholic Episcopal Conference of Kenya in 2015 has never been denied. Under the guise of vaccinating girls against tetanus, organized by the WHO and UNICEF in Kenya, the vaccine was found to contain «24 to 37.5% human chorionic gonadotropic beta hormones (BhCG), an amount large enough to cause sterility in patients»[2].

One cannot help but point out «The Coast Project», developed by the white racist authorities of South Africa, a biological and bacteriological weapons program targeting only the black population in order to sterilize the black women of that country. We cannot ignore the historic example of the genocidal extermination carried out in Argentina where of nearly twelve million blacks in that country at one time, there are currently only 150,000 Afro-Argentines!

Speaking about the human factor, reducing the number of mouths to feed while completely obscuring the pillaging of the wealth of the population by the great imperialist powers is simply genocidal

The black race is the scapegoat of humanity.

The fashionable slogan is, «demographic dividend». What is the demographic dividend? It is rapid economic growth resulting from changes in the age structure of the population of a country, due to a decline in fertility and mortality. However, we know that without meeting certain conditions (monetary, educational, linguistic, ownership of the means of production, production and distribution of wealth, etc.), even with the decline in fertility, no economic development is possible. How can one work to reduce our populations when at the same time, the French Treasury is confiscating our currency? Speaking about the human factor, reducing the number of mouths to feed while completely obscuring the pillaging of the wealth of the population by the great imperialist powers is simply genocidal. If Niger’s uranium and gas and oil revenues went to the people of Niger, if the people of Niger had monetary sovereignty, the country's 23 million inhabitants would live in comfort and development.

In Benin, are things better? Certainly not. We cannot say this mainly because we do not know the independent structures of control of vaccines such as the good initiative of the Catholic Episcopate of Kenya. Nothing can ensure the safety of the vaccines that we give to our children. For example, how do we know that the vaccination crusade against the Human Papilloma Virus against cervical cancer in girls aged 9 to 13 years operated from May 24 to 26, 2016, under the aegis of UNICEF, is safe for our children.

The aim to reduce the African population is so manifest among our Dominators that they use all pretexts to achieve their ends. For this, they disguise these operations with apparently noble humanitarian intentions. They never say that they want to reduce the population. They simply say that it is «to reduce maternal mortality by spacing births»; that «it is to avoid unwanted pregnancies». They say, «It is to reduce pregnancy in the school environment.« With these arguments, who is going to be against it? We applaud and we move on. Housewives are sterilized without the husbands giving their opinion, leading to serious family problems. Girls 14-years old are extensively sterilized in schools. The officials of the village health centers (as at Mono under the direction of the Departmental Director of Health), are asked by the village chiefs to call on women to come to be sterilized. It is free; but if the woman wants to have the undo the sterilizattion, then she must pay money! In other words, sterilization is free, but de-sterilization costs. However, the harmful effects, for example, of the use by women of pills and other contraceptive methods are now known: «breast cancer, stroke, depression, endometriosis, reduced libido, food allergies»[3]

In this operation of African depopulation, another method is used: the cesarean. Cesarean section has been adopted despite side effects! Who would be against caesarean section to save the lives of our women in labor? No one. Still it would have to be used only in cases of extreme necessity. Because, as we read in «Science and the Future» number 873 of November 2019: «The intestinal flora of babies born by caesarean section have fewer bacteria beneficial for health». And as S. Laibi says[4]: «There are risks for babies born by caesarean section...: respiratory distress, death, etc.«without hiding the negative consequences for the woman who have had caesareans. But the other consequence is that the same woman cannot have more than three caesarean sections. What a boon for those who want to «limit» births (to three children); how good this is? And for this, the donors are ready to finance free access. We rely on family planning with the ABPF (Beninese Family Planning Association) in control. Funding for this is coming.

Have we ever seen anything free from developed countries to poor countries? Never. Everything that is free is poisoned.

The consequences are already being felt in Benin. In certain regions of our country, we are already seeing a worrying deceleration of the population due to a severe decline in births. In the commune of Athiémé (Mono) for the districts of Atchannou and Kpinnou, the growth rate between censuses[5] is 1.81%, the lowest rate in the department of Mono, in which the growth rate is 2.5% for an average national rate of 3.25%«. The sterilization campaigns of organizations like the ABPF have gone through this.

The devastation has begun.

The objective in reality is to reduce the African population by a eugenics and genocidal plan. Did the many diseases ravaging Africa just happen? The new diseases, AIDS, Ebola, Lassa, etc. and cancer, female and male infertility, diabetes, etc. Yesterday was the yellow peril, today it is the black peril to be fought by the dominating Powers, which amounts to racism. Ultimately, depopulate Africa to occupy our territories.

In the light of all these considerations, for a simple question of precaution and humanitarianism (because whoever is bitten by a snake fears the earthworm that is said to be in Benin), the following ethical requirements should be imposed: